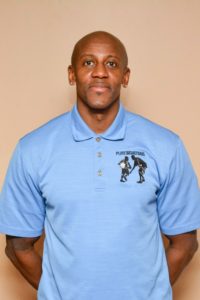 Bruce started the program to provide an intense focus on "FUNDAMENTALS", and to emphasize the lessons of integrity, work ethic, teamwork, leadership and self knowledge that can be taught through basketball. He loves the kids and understands all the dynamics that go into building a strong program. Bruce has been camp director and coached at various camps for the past several years, including Philadelphia 76ers Camp, Kenny Smith Carolina Basketball Camp, New York Knicks Basketball Camp, New Jersey Nets Clinics, Five-Star Camp, Pocono’s Invitational Camp and the Basketball City Youth Development League. He has helped players develop the fundamentals of basketball and increase their basketball knowledge.

Prior to coaching, Coach Hicks played professionally for the Harlem/Tampa Bay Strong Dogs and Jersey Skycats. He played college basketball at New Jersey City University, where he won the Division Three ECAC Championship in 1994.